Posted on December 8, 2017 By My Perfect Breakdown

I made a craft.  Not the cristmas craft that’s been sitting on my kitchen table for a few weeks, but another craft.

Well, I shouldn’t take all the responsibility for said craft.  Mr. MPB helped.  And Little MPB even attempted to help too.  Although I’m not quiet sure what Little MPB contributed should be called help.

It wasn’t the hardest craft ever, but I’m not particularly crafty.  So, I am considering this a massive success anyways.

A few years ago a bunch of pinecones ended up in our backyard from our neighbours tree. We collected them, shoved them into a garbage bag and tossed them into the garage to do something with them one day.

Well, Mr. MPB got sick of the bag of pinecones taking up space so he decided it was time to do something with them.

We had an extra string of tiny lights, so all we needed was a some sort of pinecone holding device.  We were thinking an oversized glass vase, but after searching 5 stores (with a toddler in tow) we were ready to give up.  But at store number 6, our last store, I found an overly large glass house thingy.  It was more expensive then we would have liked, but we had no patience left and just needed something.  So, we bought this overly large glass house thingy: So, with a helpful toddler, a lot of pinecones, a simple string of lights and an overly large glass house thingy, we managed to put everything together to create a something kind of nice.  And as a craft challenged person, I love how easy it was. 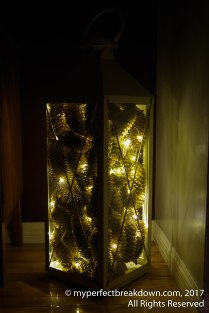 I think it works as a Christmas decoration, but I also think it works year round too as there is nothing overly Christmassy about it – rather it’s more about bringing a touch of the outdoors indoors.  In the end, as an added bonus I think the overly large glass house thingy is perfect because unlike the oversized glass vase we had envisioned, Little MPB actually cannot get inside to play with the pinecones which means I do not have pinecones all over my house.  Instead when the lights are on, he points at it and says pretty while trying to unlock the door (because he is a toddler after all).

← All The Feelings
The Worst Trip Of Our Lives →