Posted on August 3, 2017 By My Perfect Breakdown

Please meet Flick, she is a Northern Flicker.  Northern Flickers happen to be one of my favourite birds that frequent my part of the world.  They are an absolutely beautiful bird and have the most stunning colours on the underside of their wings and a little red spot on their cheeks (neither of which are visible in this photo).

I found Flick in my backyard this morning (hence the delay into today’s normal posting schedule).

Flick was unable to fly as she appeared to have a broken wing.  In fact, as I entered the back yard Flick was trying desperately to fly away with her one good wing.  But Flick simply couldn’t fly.

So, Mr. MPB offered to help her out by putting her out of her misery.  I’m pretty sure he was joking, but nope.  Just no.

So, while fighting back tears over the state of poor little Flick, I googled bird rescues and got on the phone with a local wildlife rescue agency.  Needless to say, they don’t pick up injured birds, but they accept them as drop-offs.  To which I responded, great, how the heck am I going to catch a wild bird?!  I was told, simply toss a blanket/towel over the bird and it’ll basically freeze, then pick the bird up within the towel and put it in a box.  Sure, I’ll get right on it…

I took the role of finding a box/container and an old dog towel to transport Flick to the emergency vet that works with the wildlife rescue agency. Thankfully, Mr. MPB took the role of bird catcher. 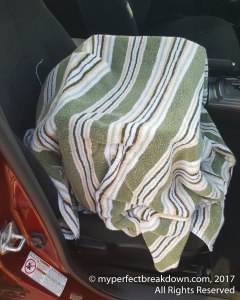 We then loaded Flick into my car (the freshly de-puked car), and I begged her not to escape her box and make a mess.  For almost the entire drive, Flick scratched at the box, making all the little hairs on my arms stand straight up on edge.  It turns out a wild bird scratching a cardboard box is the creepiest sound ever!  Then moments before we arrived at the vet, she went quiet, at which time I was petrified this entire experience gave her a heart attack and I’d be left with a dead little Flick.

Ultimately, she didn’t die under my watch and she’s now with the emergency vet.  I’m told that they suspect Flick has a broken wing, and the vet will do an initial check and the wildlife rescue will come pick up Flick and care for her until she is able to be released to the wild.  I’ll probably never hear about Flick’s recovery.  But, I suspect every time I see a Northern Flicker, I’ll think about Flick and hope she’s flying freely with her birdy friends.

And now I’m off to our vet with our dog, again, as she’s not doing very well.  I’m hoping the x-rays and blood work are just an expensive bill and nothing more.  I’m also hoping the dog doesn’t puke in my car, again.

← A No-Good, Horribly Rotten Day
Our Dog is Not Well →